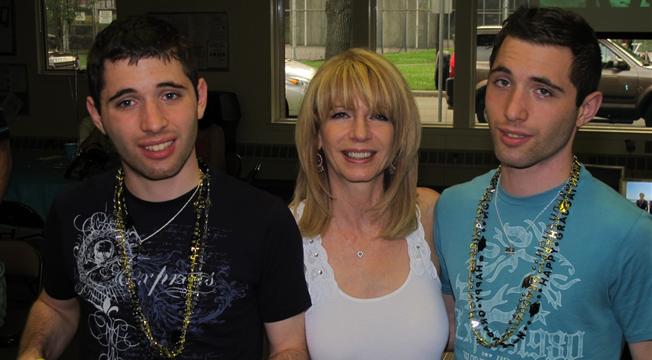 I vividly remember "the day".  Alex (Alie) whining and fidgeting under the doctor's desk, and Jamie repeatedly opening and closing the drawers of the file cabinet.  It took just a few minutes and one word to change our world forever.  "Autism".  Confusion, shock, sadness and pain quickly transformed us into energized and unrelenting parents, determined to seek the best educational program and medical treatment for our sons.

Alie and Jamie have grown to become handsome young men.  Yet, they are profoundly autistic.  Neither of them can communicate verbally, with the exception of simple words, most of which are understood only by those who know them.  When they were young, they received therapy in our home.  Once they turned five, with virtually no schools to choose from that were exclusively for children with autism, we became the founding parents of the Eden II Genesis School, now located in East Meadow, New York. An intensive behavioral program just for children with autism, this program filled a dire need on Long Island.  However, the thought that they would ever be included in any activity with their typically developing peers was only a dream. Until they started to run.

We heard about a running club that paired experienced runners with those with developmental disabilities.  After contacting the Rolling Thunder Running Club, we met two of their coaches for the first time; Shaunthy Hughes and Mike Kelly; at a nearby park, to see if the boys could run with them.  With fear in our hearts, we watched as they all ran off together; then disappearing from our sight; as we waited for their return. It seemed to be an eternity, but 30 minutes later, there they all were, running toward us at full speed.  We could see the boys were smiling and overly excited as they approached.  That was a pivotal moment for us as a family, as our journey took on a new direction. Gushing with enthusiasm, they told us that Alie and Jamie were "natural" runners with unlimited potential!  The only problem was that we would have to find a coach that could run with Alie, as he was exceptionally fast, and as we began to learn, especially gifted.

Soon thereafter we met Kevin McDermott who quickly became Alie's personal coach.  Kevin developed a special interest in Alie. Their relationship quickly took on a life of its own.  He knew Alie was fast; a "running machine" as he would say; as he would take off a top speed and not stop until he was told to to do so.  He didn't know how to pace, so every practice was a race.  That's how he earned the nickname, "one speed only".  Under Kevin's tutelage and his methodical training, Alie has grown to become an amazing, accomplished runner, consistently setting personal records each year.

The boys were welcomed and included in their high school cross country team where they participated as valuable players and competed in meets against other high school teams.  They competed in numerous mainstream races in and around the tri-state area and became "quasi-celebrities" among the running community.  The day of the 2013 NYC Marathon, Alie and Jamie were featured on ABC's Good Morning America and World News Tonight, and they have been covered in stories in The New York Times, Runners World Magazine, The Boston Globe, USA Today, Competitor magazine, Newsday, the Southampton Press, The Boston Herald, and countless other publications.  Alie typically always places first or second in his age group, and lately has been among the top overall winners, as well as first overall.  In 2009 he earned the Greater Long Island Running Club's Annual Championship Award for the 15-19 Age Group and in 2017 earned the Club's Most Improved Runner.  In 2012, he was on the front cover of Footnotes, Long Island's premier running magazine. I am happy to say, we will never run out of space for the 300+ medals, trophies and  plaques that adorn our home!

In 2010, Stephen Dalton joined them and started running races and marathons with Alex. Then in 2013, in preparation for their first NYC Marathon, the boys became members of the Achilles International Club which enabled them to run in the largest marathon in the world. And as for Jamie, my husband Allan coaches and runs long distances with him, completing eight marathons, and I run the shorter distance races with him.

In June of 2017 Kevin moved to Costa Rica, ending his eleven years of coaching Alie.  We were devastated. Luck was on our side when one of the fastest runners and certified coaches on Long Island stepped up to the plate.  Boyd Carrington, winner of international and national championships took the reins and literally "ran" with it, increasing his mileage and stepping up his training. Then Sal Nastasi, also one of the fastest runners on Long Island joined them.  They were soon to be known as the amazing #TeamSAlieBoyd.

In the 2017 New York City Marathon, Boyd and Sal, accompanied by another runner, Philip Lang, paced Alie and crossed the finish line in 2:50:05, his best of 18 marathons to date.

Coaching Alie and Jamie requires diligence, and is a huge responsibility. Because of their limited communication skills, a slight gesture or simple word is enough for them to understand and respond. Their coaches must direct them through the course, hydrate them when they are thirsty, watch for hazardous street crossings, and remove articles of clothing when overheated. Neither of them ever knows how long each race is; they just run until they reach the finish line, with their pace determined by their coaches.  Running is the number one activity for us as a family. And with all this, it is Alie and Jamie who have inspired us.  Since Alie and Jamie became runners, Allan and I started running as well.  Once I began, I continued while undergoing treatment for breast cancer.  It became additive for me; running was an emotional and physical necessity for my recovery.  Allan, who suffers from Multiple Sclerosis, an affliction that oftentimes makes running painful for him, decided the benefits outweigh the negatives, so he started running too.

Race day is always a special and exciting day for us all. My emotions are high as I wait impatiently at the finish line. I watch first, for Alie, and then Jamie.  And as they each approach the finish line, my heart pounding rapidly; I tearfully cheer, and think of how inspiring they are to so many, and how proud I am of their accomplishments.  After the race, as we celebrate among the crowd of runners, many will approach them and offer congratulations and high fives.  How grateful we are that we have discovered how much they love running!

Alie and Jamie are completely dependent and will always need 24 hour supervision.  They continue to have very challenging, and at times, extremely severe behaviors.  But we have come a long way from that day in the doctor's office.  And we have a long way to go until this journey of ours is over.